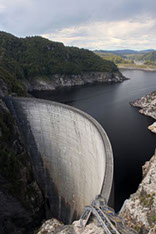 What are some of the aspects of energy? Scientists have studied all sides of energy: how to harness it to do work; how to contain it; how to convert it to other forms of energy; and whether there are certain constants involved in different types of energy.

From extensive testing and research, scientists have developed the study of the relationship between heat and other forms of energy (called thermodynamics) and have discovered various laws , or constants, two of which are

1. That energy can not be created or destroyed.

2. That energy can be converted from a useful to a less useful form.

There are two states of energy: potential and kinetic. Quantities of energy that have the capacity for moving and performing work, but are temporarily stationary, are said to have potential energy. Energy changing from stationary to moving is known as kinetic energy. Examples of each: water stored or impounded behind a concrete dam = potential energy; water released and pushing against the turbine blades = kinetic.

• mechanical, a force that causes objects to move;

• nuclear, associated with forces that bind particles of atoms together;

• and electrical, which involves the movement of electrons.